The 2022 World Cup is three years from now and host country Qatar has continued to intensify preparations to host the tournament. The tiny Gulf nation were the surprise winners of the hosting rights and are currently working on getting facilities ready for the tournament. 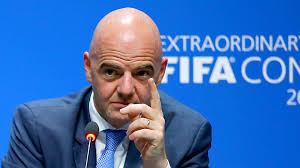 The World Cup was originally set to be a 32 team tournament but FIFA president Gianni Infantino has continued to push his agenda of making it a 48 team tournament. The Swiss administrator wants an expanded tournament in 2022 despite the difficulties of pulling it off.

He has suggested in the past that Qatar could look to share games with other neighbouring countries in the region. However, Qatar have been involved in a diplomatic standoff with neighbours Egypt, Saudi Arabia and the US.  This diplomatic row has put paid to some of the plans bring tabled by FIFA for an extended tournament.

It is understood that Oman and Kuwait are being studied as a possible host for the tournament but it is looking unlikely. The head of the World Cup organising committee in Qatar Nasser Al-Khater recently dampened hopes of a 48 team World Cup in a recent interview.

Khater said that despite the talk of a 48 team tournament the country remains committed to hosting a successful 32 team tournament.  He also dismissed the idea of the UAE sharing games with Qatar if a 48 team World Cup is held.

The current diplomatic impasse in the region is as a result of a Saudi led coalition accusing Qatar of supporting terrorism which the country denies. Despite this Qatar has been making progress on the field as the national team won the 2019 Asian Cup in what was a shock to many across the world.

It remains to be seen of a 48 team tournament would be held as Infantino looks to impose his idea to the FIFA Congress in June.  It is understood that more than 50 percent of the member associations are interested in an expanded 2022 world cup.