The Japan national team has sacked their coach VahidHalilhodzic and replaces him with Akira Nishino just two months before the start of the World Cup. This will come as a surprise to many people given that it was the Bosnian coach that has helped Japan qualifies for the World Cup. 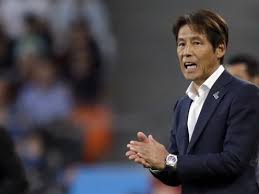 However, it is believed that the coach has gradually lost the backing of the Japan federation after a series of poor results that has seen the team losing against Ukraine and drawing with Mali.

The Japanese federation said that the coach VahidHalilhodzic has lost touch with his players and that he no longer has the support of his players. He said that there have been many complaints about the Bosnian coach training methods and that he does not listen to the suggestion.

He said that it was becoming a toxic environment and that there was no way that the Japan national team could perform well at the World Cup if VahidHalilhodzic remains at the head of the team. He said that is the reason why they have taken the decision to replace him before the World Cup.

He said that the choice of Akira Nishino is a good one because with two months only left before an important competition it is necessary that they look for someone that already knows the team.

He said that they have worked with VahidHalilhodzic to solve the differences between the players and him but they could not do anything. He said that it was an important decision to take and that they do not do it in haste. He said that this was the right thing to do if Japan wants to perform well at the World Cup and that it is important to do it right now.